Cheetah sightings are often the highlight of a safari. On average, you could expect to have one or two good sightings of these magnificent spotted cats on a 4 day visit to the Serengeti National Park in Tanzania, particularly on the short grass plains to the south. This particular occurrence is not only extraordinary in that it was the fifth cheetah sighting for the Keith family and their friends on their safari in January 2009, but more so because of the number of cheetahs we saw. At one stage there were 9 cheetahs in close proximity to our vehicle when on average you could expect to see 2 or perhaps 5 of them if you are really lucky!
It all started with our last game drive out of our private camp in the Kusini woodlands. Heading south east towards the Ndutu woodland, on the border with the Ngorongoro Conservation Area, it wasn't long before we had our first significant sighting for the drive - 3 young male cheetahs. It became apparent that they weren't going to be moving any time soon so we decided to carry on with our game drive - planning to return later in the day.
When we returned to the 3 males on the drive back to camp  we found them in the same state of mind as when we left them and decided to call it a day. Not long after we had driven away, something caught my eye off in the distance. What at first glance appeared to be a safari vehicle parked on the plains with people sitting on the roof. The view through my binoculars told a very different story! There was indeed a safari vehicle parked out on the plains, but instead of people on the roof there were 4 young cheetahs! This wasn't the first time that I had seen cheetahs on the roof of a car, my own included, however this was the first time I had seen 4 cheetahs on the roof of a car!
The driver had obviously reacted quickly to the cheetahs climbing onto his bonnet and decided to shut his roof. He had what was the sighting of a lifetime taking place on top of his vehicle with no way for for him or his clients to see what was going on. Luckily I was able to film this remarkable occurrence and send them a video of the fun and games taking place above them.

After about 10 minutes, with a little encouragement from the driver, the youngsters decided to vacate their temporary vantage point and join their sister and mother who were resting in the grass about a hundred meters to our left. Along the way one of the young males decided he liked the look of our vehicle and soon we had our own hitchhiker. After a few curious glances through the window, he decided he wanted a higher vantage point and before we knew it, or could close the roof, we were looking up at the underside of the fastest animal on four legs!

Despite some nervous moments, when it looked as though we were going to get an even closer view of our new friend, both animal and humans came out of this amazing experience no worse off than an increased heart rate. Turns out his mother had caught a baby gazelle for him and his siblings to practice hunting on and he didn't want to miss out on the experience. We then watched as the 5 reunited siblings took it in turn chasing the startled antelope before knocking it down with a gentle swipe of their front paw. This happened over and over again and each time when the foal was brought down the inexperienced hunters would stand there seemingly unable to carry out the inevitable next step.
Just as it looked as though their mother would finally take over, panic ensued and before we knew what was going on, the 3 male cheetahs we had observed earlier were hot on the heals of one of the young males. Thankfully they too seemed to be inexperienced, as it is not unheard  of for cheetah coalitions to chase and kill rival males. In this case, the young males seemed more interested in the reproductive state of the females. Pretty soon all 9 cheetahs became tired of all the excitement and sat themselves down to rest only meters from our car. That is how we left them as we headed back towards camp, everyone in quiet contemplation of the extraordinary sighting we had just witnessed. 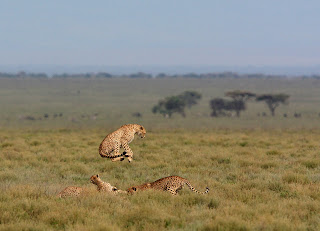 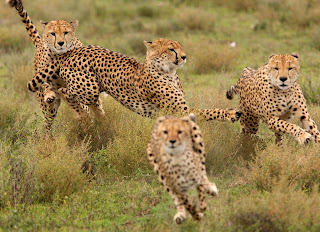 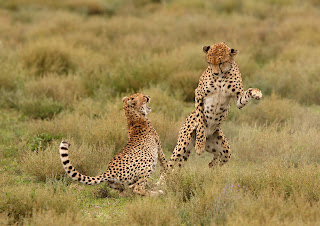